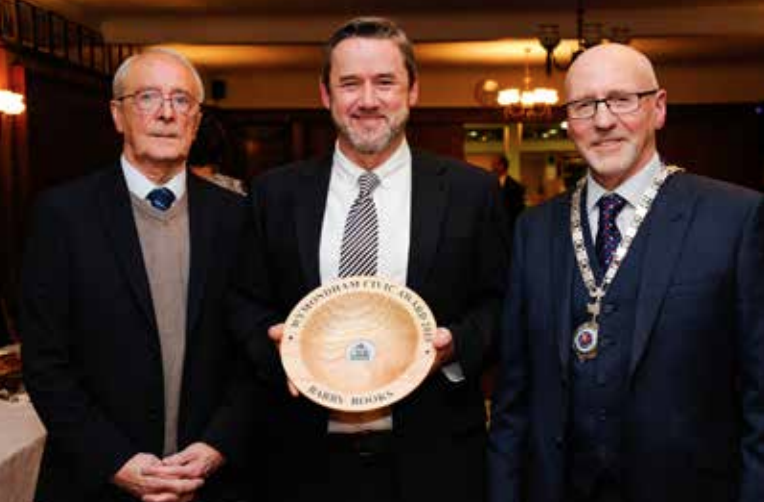 A church minister who has spent the past few years leading a project to convert a derelict building into a resource centre to tackle male loneliness has been awarded Wymondham Town Council’s Civic Award for 2018. But in a strange twist of fate, the project he set up is now in the midst of a funding crisis and could face closure. Pastor Barry Rooks, of the Alive Church, set about transforming the building on Ayton Road in July 2016 and the building, now called The Arc, is home to The Shed, which brings men together to learn practical skills and reconnect with their peers. At the time of going to press, the organisation needs to raise £10,000 to be able to renew its lease on the building and continue its work in bringing men together in a non-judgemental environment. The project is on the verge of completing renovations which will allow it to become self-sustaining through the letting of rooms to other groups and organisations. Mayor of Wymondham, Cllr Tony Holden, who presented the award, said: “Male suicide rates are four times greater than those of women, and this man has been trying to address this issue with his colleagues.” Steve Lyne, the Shed’s assistant manager, gave an example of the importance of the organisation’s work, saying: “We have several people down the Shed who, when they first arrived, were very shy, very enclosed in themselves. One the couple of years that I’ve been there, they’ve just blossomed, they are now part of us. “Gradually, gradually, we’ve all come together and we are a very happy group. We desperately need funding and our next project is to secure that funding and make it a more viable project.” Accepting the award, Pastor Rooks dedicated it to the men involved in the Shed who have been working on the renovations and developing the project: “The impact it has on these men is just amazing. We have people learning new skills and who are now applying for jobs. Some of these guys are saying ‘I’ve now got a second chance, someone is believing in me and I have a place where I can go’, and the atmosphere is so uplifting and encouraging, and we’re just getting started. So for us to get so close to renovating the building and get it fully launched as a sustainable Shed, it’s quite frustrating that we’ve reached this point and the finance is quite tight.”